Dynamic load plate test device TERRATEST 5000 BLU is the most intelligent Light Falling Weight Deflectometer in the world and the world’s first operating via Bluetooth + App for iPhone and Android.

TERRATEST 5000 BLU revolutionises the dynamic load plate test of bearing capacity because it is the world´s first LWD which operates wirelessly. Measurements are transmitted via Bluetooth from load plate to measuring computer, smartphone or tablet. This is a huge advantage on the construction site because the measuring computer does not have to be put directly next to the mechanics. No wire will cross your dynamic load plate test procedure anymore!

TERRATEST 5000 BLU dynamic plate load test is particularly suitable for the use in foreign countries. Thanks to its wireless operation, repairs of the “Achilles’ heel”, the socket of the load plate, are being avoided. NO CABLE – NO PROBLEM!

As the first manufacturer in the world TERRATEST® offers a smartphone app for the control of their Light Weight Deflectometer. TERRATEST 5000 BLU transfers the test data via Bluetooth® from the load plate to a smartphone. The advantage is obvious: during the dynamic load plate test the measurement electronics do no longer need to be placed next to the mechanics. Thus, the user has both hands free for the handling of the device.

In continuous measuring mode the test is being controlled solely by the LED of the load plate, without having to handle the smartphone. The phone can comfortably remain inside the jacket pocket. Measurements with the smartphone can be transmitted via email as PDF file in real time to the client or the office. Texts as client, construction site etc. can be entered via the smartphone. Thanks to the camera function of the smartphone it is possible to directly insert pictures of the test point into the protocol. 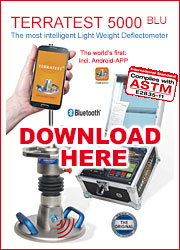 In compliance with all recommended rules of conduct and precautionary measures, TERRATEST® is currently manufacturing Light Weight Deflectometers without any restrictions. The calibration and customer service departments are also working as usual. Back at the start of the... mehr

Light Weight Deflectometer TERRATEST® has launched recently the new, enhanced web-based PC-software „TEOLO“. The new version offers a lot more possiblities compared to the old desktop software „TERRATEST 2.0“ and it is even more user-friendly. Main innovation is that... mehr