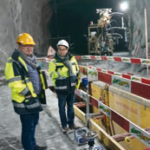 A remarkable location for the delivery of one of our instruments has been selected in Switzerland. The Creabeton Baustoff AG from Rickenbach manufactures concrete products for civil and road engineering. The workshop was carried out together with IB Sprenger & Steiner from Liechtenstein in the Hagerbach tunnel, which is used for trials. “We want to… mehr 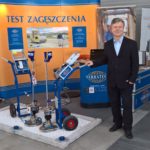 As Autostrada Polska in Kielce represents one of the largest trade fairs for infrastructure and road construction in Eastern Europe, TERRATEST® definitely could not be absent. 500 exhibitors and over 15,000 visitors participated in the event, which was accompanied by numerous seminars and subject-specific discourses. The presentation of the new light weight deflectometers 5000 BLU… mehr 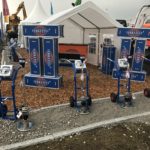 Our well-known lightweight deflectometers TERRATEST 5000 BLU and TERRATEST 4000 STREAM for dynamical load plate test are presented in action during trade fair “Tiefbau Live”, taking place from 04/27 to 04/29 in Karlsruhe. The streaming method, enabling measurement results to be transferred on the construction site directly from the ROBUSTA electronics to a smartphone, is… mehr


The lightweight deflectometer was presented to budding foremen, masons and apprentices of the paving trade during a practise building site as part of the Master Craftsman’s examination for pavers being run as a course by the Chamber of Commerce in Graz / Austria. The light weight deflectometer for the dynamic plate load test is brilliantly… mehr 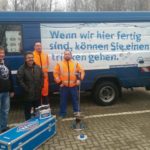 The light weight deflectometer for dynamic plate load test is to be immediately put into use in the Free Hanseatic City of Hamburg for quick and precise compaction testing in construction projects for water supply and water disposal – including water supply works, sewage works and energy supply. Via the two arms of the business,… mehr 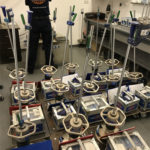 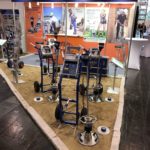 The light weight deflectometer for dynamic plate load bearing testing was exhibited by TERRATEST at GAT 2016 in Essen. The trade fair for gas and water took place from the 8th to 10th November 2016 in Hall 3 at the Gruga Exhibition Ground. Alongside the Bluetooth device TERRATEST 5000BLU, TERRATEST presented the new light drop weight… mehr 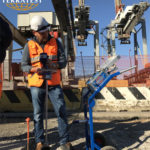 The TERRATEST 4000 USB Light drop weight tester is now due to be used for underground and street construction works in the port of the ligurian town, La Spezia. “We will be using the light weight deflectometer in the construction of a container terminal.” explains Luca Battistini, CEO of Edilgroup SRL. “We are impressed by… mehr


The Light Weight Deflectometer was presented by TERRATEST together with the British distributor, SMR UK Ltd. at the Utility Live Show in Birmingham on the 17th and 18th May 2016. The annual trade fair and accompanying convention focuses above all on pipeline construction, and is the most important event for infrastructure measures in Great Britain…. mehr 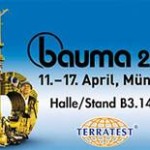