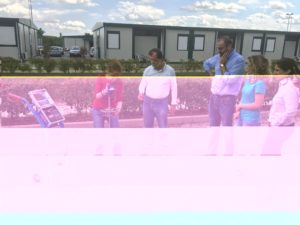 The Lightweight Deflectometer for the dynamic load plate test TERRATEST 5000 BLU is now being used on the biggest road construction site in Italy. “Superstrada Pedemontana Veneta” will connect Vicenza and Treviso and reduce traffic on the highway A4 between Verona and Venice and on many roads in Veneto. Its completion is scheduled for 2020. “We are very proud that Northern Italy relies on the Light Weight Deflectometer TERRATEST 5000 BLU”, says Frank Georg Schulz, TERRATEST’s CEO. “Especially since this road construction project is one of the biggest in Europe, being worth around 2.5 billion Euros. And our load plate will help optimising the work”, adds Schulz.

The Superstrada is no traditional highway, but Italy’s only normal fast road that charges tolls. It will have four lanes for 95 km with two lanes plus an emergency lane in each direction. Out of the 90 km which run along the foot of the Alps 50 km will be in trenches, 26.5 km elevated and 8 km in tunnels. Additionally, 6 km underpasses will be built.

”We will use the Light Weight Deflectometer to accelerate the load plate tests and thus the construction progress and to optimise the quality of the compaction work”, says Francesco Trulli from the test laboratory Geolab Trevigiana. Even though there is no official standard for the dynamic load plate test in Italy, more and more construction companies and test laboratories rely on the Light Weight Deflectometer from TERRATEST. “Considering the massive earth movements during the construction of the Pedemontana Veneta, the benefits of the dynamic load plate are clearly obvious: easy handling together with precise test results and quick test execution”, explains Frank Georg Schulz.

The Pedemontana starts at the A4, west of the provincial capital Vicenza and leads northwards in a wide circle around Vicenza. North of the town it crosses the highway A 31 and runs further east, past Bassano del Grappa and Montebelluna, to Treviso, where it meets the highway A 27. Thanks to the “Superstrada Pedemontana Veneta “ the route from Verona to Treviso will be shortened by 50 km. It will bring about a massive traffic reduction for the area.