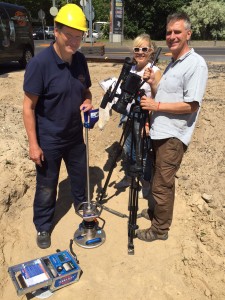 Terratest started with the shootings for a new product video about the Light Weight Deflectometer for the dynamic plate load test TERRATEST 4000 USB in Berlin. Under a clear blue sky it was possible to put the Light Drop Weight into an especially promotionally effective light. “Today we had perfect conditions for a good shot”, says Beatrix Schwarz, recording director of the Berlin advertising agency Ideenfabrik. “Both, the good location in the middle of Berlin and the weather, were absolutely great”, adds Schwarz.

The shooting took place on the construction site at the corner of Bundesallee with Nachodstraße in Berlin Wilmersdorf. Here a district heating pipeline DN 800 is being put in place by Vattenfall before the end of the year. What is so special about this construction site? An old, two-lane tunnel from the 60s which has never been used and now been uncovered. Vattenfall is turning this tunnel into a transfer shaft for the district heating line, thus providing it with a new purpose. “I really enjoyed the shootings for the new Terratest video”, says Falko Weiss, one of the sales representatives who usually introduces the Light Weight Deflectometer to potential clients. “Every scene was filmed several times, the film crew was very professional, paying attention to every little detail”, adds Weiss.

The new video introduces the Light Weight Deflectometer “TERRATEST 4000 USB” as cable device. Up to now the Light Drop Weight “TERRATEST 5000 BLU” with Bluetooth technology for the dynamic load plate test has been promoted on the TERRATEST homepage. “We now also want to introduce the cable version of the Light Weight Deflectometer for the dynamic load plate test with a new product video to our potential costumers”, says Frank Georg Schulz, CEO of TERRATEST GmbH Berlin. “Its excellent extensive equipment together with its unbeatable price-performance ratio makes this Light Drop Weight very profitable for our customers”, adds Schulz. The Light Weight Deflectometer of the Berlin-based company is being used on all continents of the world, which is why the new product video for the dynamic plate load test will be produced in different language versions.