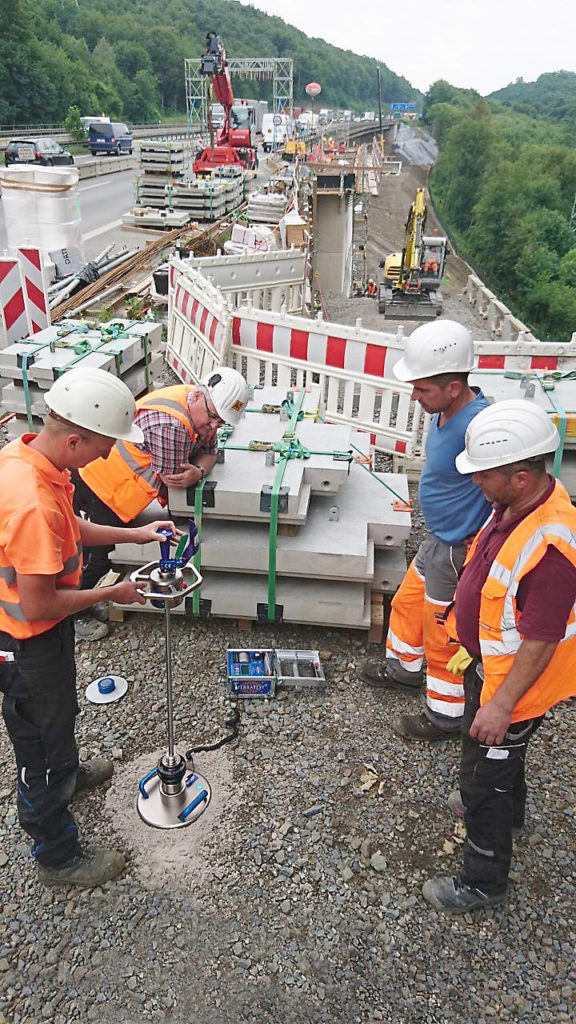 Bridge construction works for interstate highway no. 1 in Germany are currently successfully supported by TERRATEST’s model 4000 STREAM. For the Volmarstein viaduct with a length of 315 m, which is frequented everyday by more than 100,000 vehicles, recalculations of the statics have revealed the presence of flaws not to be corrected by sanitation. “For this reason, a completely new construction of the bridge proved to be necessary. For the abutments of the new bridge piers, we are establishing a reinforced soil construction”, explains builder’s manager Michael Rehmann. “This includes an integrated frost protection layer with a graining of 45 – and the lightweight deflectometer is a valuable assistance for performing dynamic load plate tests on each second layer of the gravel base, so its bearing capacity permanently remains under control.”
A reinforced soil construction represents a special form of retaining wall and was invented in the sixties of the past century by the French engineer Henri Vidal. Tensile loads are directed to a reinforcement inserted into the soil, and then conveniently distributed. This reinforcement is usually made of plastics in order to avoid corrosion problems. The new abutments and piers are placed between the former elements, so the length of the bridge is reduced to 285 m. Its width of 31 m exceeds the value of the old bridge by 2 m and offers three lanes in either direction. The construction is intended to be completed in the year of 2020.