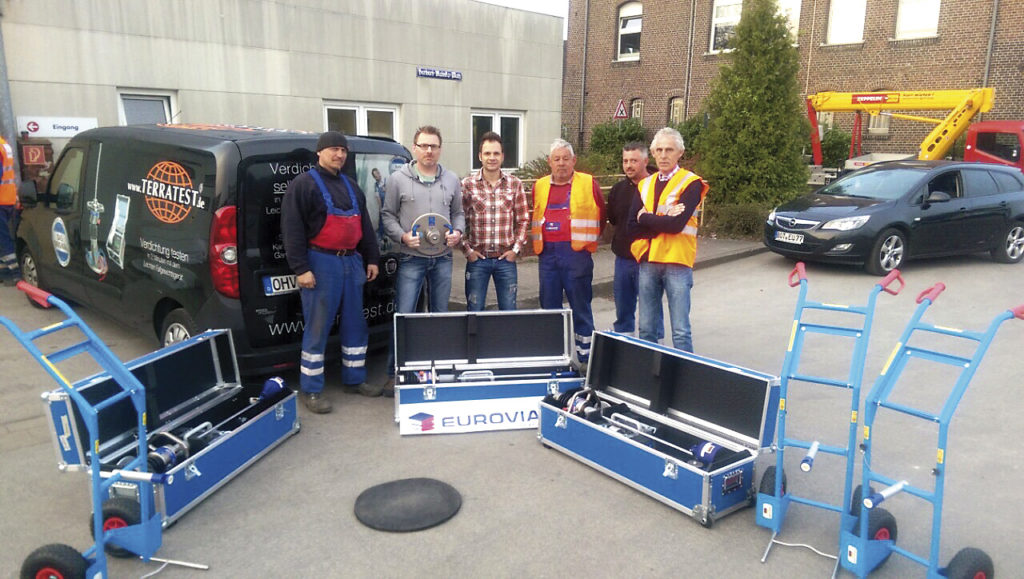 Between Eurovia Vinci, a company omnipresent in road construction all across Germany with 3.200 employees, and TERRATEST®, a continuous relationship has been established already years ago. Due to positive experience with our previous models, Eurovia has decided to purchase nine Light weight defelctometer of the Bluetooth Series 5000 BLU. All of their load were engraved with the company logo already during production. These instruments are used in the subsidiaries of Berlin, Stuttgart and Xanten. A substantial training in practical application has been performed beforehand, and the compaction tests on the sites meanwhile have been started.

Nine special versions of the 5000 BLU series have been configured for Eurovia, to be employed for optimization of soil compaction at three different sites. The Bluetooth® connection with a reach of 10 m proved to be particularly practical.

Simplified Transport by Case and Hand-Cart

Each of these instruments is equipped with the transport case Milano and the mobile measuring system Carello. Due to the considerable mass (35 kg) of the heavy weight deflectometers, this mobile system configuration without any doubt is of benefit for the personnel on site. The deflectometer has simply to be plugged onto the transport device and rolled to the places intended to be inspected. The system permanently remains in a state ready for use and can perform a measurement instantaneously, since the connection between load-plate and measuring electronics by means of Bluetooth® equipment provided, is established within two seconds. This latter parameter, extensively examined by the customer beforehand, finally was decisive for his buying decision.

After the delivery to the three sites of Eurovia, the members of the team were instructed. Their reaction proved a great surprise: “We could not believe that it was possible to speed up our work at that degree! Just pressing the button and starting the test without delay…” The customer himself is convinced as well. His investment will be amortized within some months.