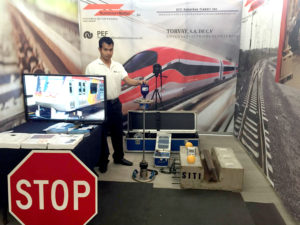 The Light Weight Deflectometer from TERRATEST convinced the expert audience of the track construction industry during EXPORAIL 2015 in Cancun, Mexico. On the 9th and 10th of February the operation of the Light Drop Weight for the dynamic plate load test TERRATEST 4000 USB was presented by representatives of the TERRATEST company at the LARGEST track construction fair of the country. “We are indeed pleasantly surprised by the great feedback of the Light Weight Deflectometer”, says Fernandez Gijon, general manager of Ferrovias Construcciones Mexico S.A. “We spoke to potential customers here at the fair and were able to make them specific offers”, adds Gijon.